the chronicles and imagination of Amanda hazard

As usual, I am sitting at work; trying to look busy, trying to sort out my bills, trying to figure out what I have to do when I get home. Then I have the thought I usually do when I don’t have much else to do.

Wow, I haven’t written in a while.

I am always tempted to fulfill the need to write—but a lot of the time, I fall flat. I run out of what to say. Those times, I feel like what I say and think doesn’t matter to anyone, so why bother?

I probably shouldn’t bother, because who freaking cares besides myself?

I probably should bother, because why should it matter if anyone else cares besides myself?

What a first world dilemma I have on my hands.

Speaking of first world dilemmas, this past weekend has been really hard on me. The past two weekends, most of my best friends graduated college. That could have been me, too, if I had just worked a little harder, and found the money to keep me going. Instead, I find myself sitting in the same seat, doing a boring 9 to 5 job, just to keep rolling along.

I never wanted this for myself, but I know it’s the hardships that make the good things so much better.

And so, I must keep rolling along.

A couple weekends ago, after waiting for what had felt like years, I finally saw Waitress. It was a joint birthday present to myself and my little sister, and it was so good! The cast was so charismatic, the choreography was very clean, and Sara Bareilles was phenomenal (but I had never thought that she would have been any less than perfection). I loved every second of it. After, I planned for us to go to my favorite diner in the city, Ellen’s. If you’re into show tunes and good fries, Ellen’s Stardust Diner is the spot; the wait staff is just so talented and amazing, and I am never disappointed there. We also went to Madame Tussaud’s Wax Museum—it was the first time for both of us—and that was pretty damn fun if I do say so myself. I was totally in my element that day.

Couldn’t go to the city without crying outside of the Richard Rodgers about how I can’t afford tickets to see Hamilton.

Basic photo of my playbill and ticket. (I was really excited.)

The cast of Waitress 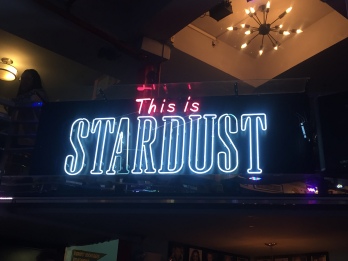 Caitlyn with her “real parents”, the Obamas. 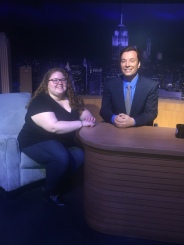 Me, too excited for words, with one of my celebrity crushes, Jimmy Fallon. 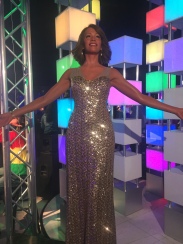 The Queen Diva herself, Whitney Houston, looking like an actual angel.

Caitlyn was really excited about posing with Derek like this.

Fast forward to last weekend, where I was a total mess—my sisters, Brianna and Caitlyn, can totally vouch for that. It started on Saturday when I realized my friends were graduating college. One of my best friends growing up, Jeanette, had graduated the weekend before; that one didn’t upset me because I knew that only meant she was coming home, back on Long Island. I was so excited to see her and get more than just a summer with her again. Surely it wouldn’t be like high school, when we would hang out every single day, but it gives me some peace at mind with her around the block from me; I’ve missed her so much in the time that she’s been at school, so knowing I can see her just about whenever I want makes me content.

But this past weekend was graduation for Iona’s class of 2017—the class I was supposed to be a part of. I’ve been working as hard as I can to get back to college, but to see my friends graduate without me hurt. Don’t get me wrong, I’m the proudest Mom there is when it comes to them, but it’s still pretty painful to know that it could have been me, too. Living with two years’ worth of FOMO was one thing, but feeling left behind is on a whole other level. (Yes, I did just use a Kardashian quote, judge me.) I wallowed in my self-pity throughout most of the day, but I also had to do it while working.

Working, because the very next day was something I had been looking forward to and dreading at the same time—Amanda’s Bridal Shower.

I know what you’re thinking. “Why would you be dreading a bridal shower?”

And, don’t you worry, I will tell you why.

I guess you can say I put a lot of pressure on myself, but how could I not? Only a complete POS would have floated through the weekend without stressing. And, for what it’s worth, it’s the stress that makes me move. My sisters and I, with the help of Kaylin (bridesmaid), set up the shindig at Amanda’s grandmother’s house, wondering where the hell the chairs were. My sisters could probably feel me stressing out about the lack of chairs on the back deck, where we were supposed to have the party.

Instead of letting my stress get to me, we set up everything else, and hoped for the best.

Which, thankfully, ended up being pretty good! The set up ended up coming out really cute (and I totally wish I took pictures of it, but I didn’t), the games were pretty amusing (I was really proud of the Jeopardy Caitlyn and I put together), and the food was pretty good—thanks to my mom, whose cooking is always on point. Amanda looked really happy with her gifts, and I received praise from a couple people—including my sisters, who are really hard to please. All in all, it was a successful day, but I was so excited to fall asleep when I got home, although I was already not looking forward to work the next day.

The bride to be, Amanda, with her cute “Miss to Mrs” banner 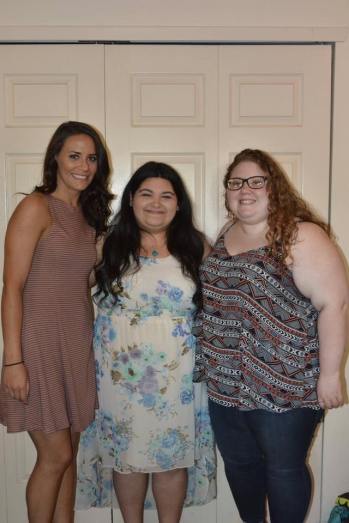 Kaylin, Amanda, and I

So these past few weeks have been pretty busy, despite my binge watching Keeping Up with the Kardashians. (Yes, you read that right. I normally don’t like reality TV, but they’re really amusing.) My sister, Brianna, also aged up a bit this week; she turned twenty on Monday, so we got to celebrate that on Tuesday. Today is my brother, Heinrich’s, birthday, and we had cake for him on Wednesday, so this week has been a lot of moving and not enough relaxing for me.

If I’m going to be honest, what I would really like right now is some sleep.

(And to finally get my dress hemmed for the wedding, because that really needs to get done.)

One thought on “Stressed Out”

Obsession of the Week